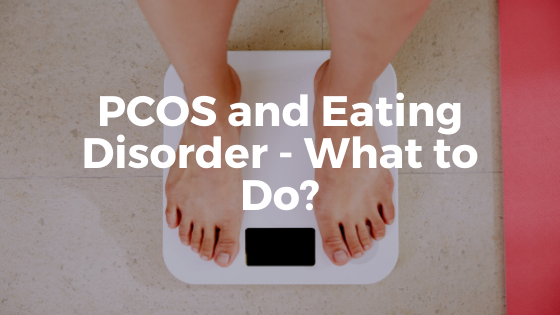 Polycystic ovary syndrome (PCOS) is a common disorder of the endocrine system in women, characterized by ovulatory problems, weight gain, and signs of excess androgens such as acne, excess hair growth, and scalp hair loss. Many of the symptoms of PCOS can lead to body image issues, which are often also connected to eating disorders.

The Link between PCOS and Eating Disorders

Eating disorders are life-threatening conditions that are often associated with PCOS.1 The risk of binge eating and bulimia nervosa was said to be four times higher in women with PCOS than the healthy control group.2

The suggested link between PCOS and eating disorders is not yet well understood. But the risk factors for these conditions are also prevalent in women with PCOS:3,4

Based on the list of symptoms of PCOS, it is no surprise that many women affected by PCOS have negative body image or body dissatisfaction. If you have body dissatisfaction, you may find yourself constantly criticizing your appearance. The symptoms of PCOS were associated with low self-esteem and moderate to severe psychological distress, with obesity as the major contributing factor.6

Women with PCOS are often advised to lose weight through dieting. However, weight suppression and dieting are well-established risk factors for eating disorders.

Eating disorders are also linked with distorted body image.7,8  People suffering from distorted body image often have unrealistic views of their bodies. For example, you may see yourself as morbidly obese even if you are at a healthy weight range. You may obsess about the appearance of cellulite or stretch marks even though these are normal changes that your body goes through as you age.

How one views oneself is influenced by several factors. Your perception of physical attractiveness, health, and acceptability starts to form during childhood. Your personality and experiences play a role, especially the feedback you get from family, mentors, and peers. Perfectionism—the constant need to appear “perfect” in the eyes of others—and self-criticism are personality traits that can give you a negative or unhealthy perception of yourself. These are associated with depression and eating disorders.9,10

The following are the types of eating disorders associated with PCOS:

The condition is also known as the binge-purge syndrome. It refers to regular episodes of eating very large quantities of food within a limited time (binging), followed by attempts to get rid of the food consumed (purging) usually through:

Of these methods, self-induced vomiting is the most common. People with bulimia feel guilty after a binge and suffer from pangs of guilt, shame, and remorse.11

This disorder is characterized by recurrent binge-eating episodes like in bulimia nervosa but without episodes of purging. The person experiences high distress after a binge episode. People who are overweight or obese are at increased risk of developing binge eating disorder.

People with night eating syndrome usually eat little during the day then wake from sleep to eat at night. This pattern of food intake is often found among people who are obese. Night eating can be triggered by stress and depression.

What you should do?

If you are experiencing symptoms of an eating disorder, seek the help of your doctor and PCOS care team. Eating disorders are complex psychological diseases, and women with PCOS will benefit from care, counseling and support groups to help them develop a healthier attitude about food and their bodies.

Treating a combination of PCOS and an eating disorder is tricky because the usual weight management recommended for PCOS. For instance, a persistent focus to lose weight can trigger the re-appearance of an eating disorder. Patients will require a team of experts with experience in treating PCOS and eating disorders. An ideal multidisciplinary team involves physicians, registered dietitians, and psychotherapists. As a first step, reach out to your doctor, healthcare provider or PCOS care team.