How Can PCOS Lead To Sleep Apnea? - PERLA Health

How Can PCOS Lead To Sleep Apnea? 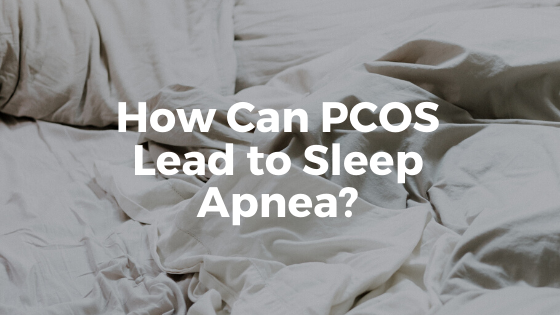 Sleep apnea is a recent addition to the range of health risks associated with PCOS (Polycystic Ovary Syndrome). There is some evidence that women with PCOS are at increased risk of developing obstructive sleep apnea compared to women without the syndrome. Keep reading to better understand the link between the two conditions.

A 2019 study published in the European Journal of Endocrinology revealed that women with PCOS are two times more likely to develop sleep apnea than women without the condition, regardless of the degree of obesity, although the risk rises with increased weight.1

Research suggests that sleep apnea is underrecognized by clinicians who care for women with PCOS.5 If you are experiencing symptoms suggestive of sleep apnea, including snoring, excessive daytime sleepiness, and fatigue, talk to your PCOS care team.

What is Sleep Apnea?

Sleep apnea is a form of sleep-disordered breathing (SDB), affecting almost one billion people worldwide.6 It is characterized by pauses in breathing during sleep that last for a few seconds and can occur multiple times throughout the night, depending on the severity of the condition.

Obstructive sleep apnea (OSA) is the most common type of sleep apnea. The term obstructive is used when an upper airway obstruction is present resulting in significantly reduced (hypopnea) or absent (apnea) airflow. The usual cause is when the soft tissue at the back of the throat, also known as the pharynx, collapses during sleep.

Apnea: a decrease in airflow of greater than 70% that lasts at least 10 seconds.

People with OSA often suffer from loud snoring, followed by choking or gasping noises that are sometimes disruptive enough to wake them. Sleep apnea is a serious health issue because it deprives a person of sleep and oxygen.

What Are The Symptoms of Sleep Apnea?

Obstructive sleep apnea comes with nighttime and daytime symptoms.9 Typically, the symptoms may have been present for many years before the person seeks treatment.

Witnessed apneas during sleep, usually reported by a bed partner, is the hallmark of obstructive sleep apnea.10 Snoring is the most common symptom. Almost all patients with OSA snore, but not everyone who snores has OSA.

How does PCOS increase your risk for sleep apnea?

The connection between PCOS and obstructive sleep apnea is still unclear. There is some evidence to suggest that having sleep apnea, especially the severe type, is strongly associated with metabolic abnormalities in PCOS.5

Several researchers believe that PCOS and OSA coexist and that either condition could contribute to the complications of the other. Interestingly, both PCOS and OSA are linked to similar health risks:11,12,13

The 2019 study mentioned earlier also suggests that excess testosterone and low progesterone may contribute to the increased risk of sleep apnea in women with PCOS. But it is still unclear if treating sleep apnea has an impact on PCOS symptoms.

How is Sleep Apnea Treated?

Both PCOS and obstructive sleep apnea are treatable conditions. Your doctor can assess your sleep problem and refer you to a sleep center for further evaluation. Additionally, an otolaryngologist or ENT specialist can check if there is an obstruction or blockage in your nose or throat.

Milder cases of OSA usually respond positively to lifestyle changes. Losing weight, if necessary, through exercise and a healthy diet is recommended.

CPAP and other similar breathing devices are the most widely used treatment for sleep apnea. It consists of a soft mask worn over the nose, providing a continuous supply of pressurized air to prevent the airway from collapsing. A sleep specialist will determine if you will benefit from a CPAP.

There is some evidence to suggest that the use of CPAP can help improve insulin sensitivity, high blood pressure, and high cholesterol in women with PCOS and sleep apnea.14 Talk to your PCOS care team to know more about how sleep apnea is diagnosed and treated.

Sleep apnea can affect many women with PCOS. If you are experiencing the symptoms of sleep apnea, such as snoring, choking or teeth grinding at night, or sleepiness, mood changes or irritability by day, make sure to mention it to your PCOS care team or primary care physician. Together you can find a treatment for your sleep apnea.