Are Period Tracking Apps Useful for Women with PCOS? 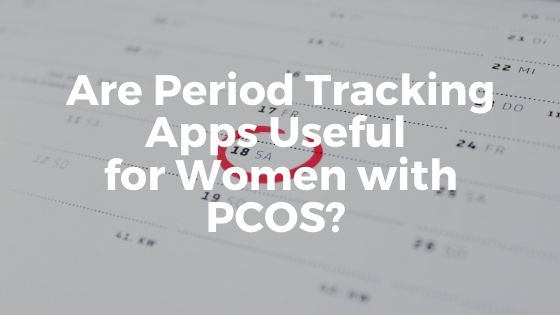 There is a huge variety of period tracking apps available on the app market, and many are quite handy for keeping tabs on your menstrual cycle and monthly symptoms. Some are designed to help you get pregnant or avoid getting pregnant. Others have an added health feature that evaluates your risk for hormonal imbalances like polycystic ovary syndrome. But are these apps accurate? Are they actually useful for women with PCOS?

Period tracking apps are the fourth most popular health applications among adult women1 and the second most popular among female teens.2

The majority of these apps have a similar interface, wherein users can record the length of their periods and the symptoms and mood changes that occur throughout their cycles. It’s like journaling, with an eye towards understanding your unique patterns and being aware of your general reproductive health and wellness.

Aside from collecting data about your menstrual cycle, some apps will let you log detailed information about your sexual behavior, including when you have sex, whether you have had unprotected sex, or if you are using contraception.

These are not mandatory, though. You can skip these questions, depending on your tracking goals. If you simply want to know when your next period is due, just log your past periods and the app will predict your future periods or ovulation cycles.

The Benefits of Tracking Your Period

Keeping track of your period is important for your health. It allows you to understand your cycle, track ovulation if you are trying to get pregnant, and spot abnormalities such as irregular or missed periods.

A 2017 study from the University of Washington has shown that women track their periods because of the following reasons:3

Almost half of the 687 participants track their cycles using smartphone apps. But for these apps to be useful, they need to be accurate.

Women often judge apps based on the accuracy of their predictions. Although some apps are successful in meeting users’ needs and goals, researchers at Columbia University Medical Center have concluded that out of 108 free period tracking apps, about 95% are inaccurate.4

Another study published in the Journal of Obstetrics and Gynecology supported the claim, citing that it is not possible for apps or calendar-based methods to accurately predict the day of ovulation using the cycle-length data alone.5

The challenge of menstruation and fertility apps is that not all women have regular periods. In addition, many apps don’t allow users to correct wrong predictions or input data that could explain a missed period, such as stress, diet, pregnancy, or change in birth control.

Lack of ovulation, irregular periods, and difficulty conceiving are some of the hallmarks of polycystic ovary syndrome. PCOS is a hormonal disorder in women, which can lead to infertility, heart disease, diabetes, sleep apnea, and strokes.6 It is a very common condition, but often misdiagnosed and misunderstood.7

To address this challenge, some period tracking apps offer a feature to assess a woman’s risk of PCOS.8 Built on machine learning, they use an algorithm to detect whether a certain combination of symptoms logged by users represents a potential risk for PCOS.  It is a well-meaning move but experts are skeptical.9 Healthcare providers are concerned that most such apps are not evidence-based and may have unintended consequences. A PCOS misdiagnosis, for instance, can cause unnecessary stress and anxiety. If you are worried about having symptoms of PCOS, it’s best to get in contact with your healthcare provider directly.

Using Period-Tracking Apps to get Pregnant

Fertility tracking apps are helpful if you just need a general idea of your fertile window. Researchers believe that using cycle length alone is not enough to give accurate predictions and that the only way period trackers can predict ovulation is to provide a very wide fertility window, “which is no better than the advice of frequent intercourse.”5

If you have PCOS and have difficulty getting pregnant, you should consult your PCOS care team. Your doctor or gynecologist can refer you to a fertility specialist so that a tailored treatment plan can be put together for you.